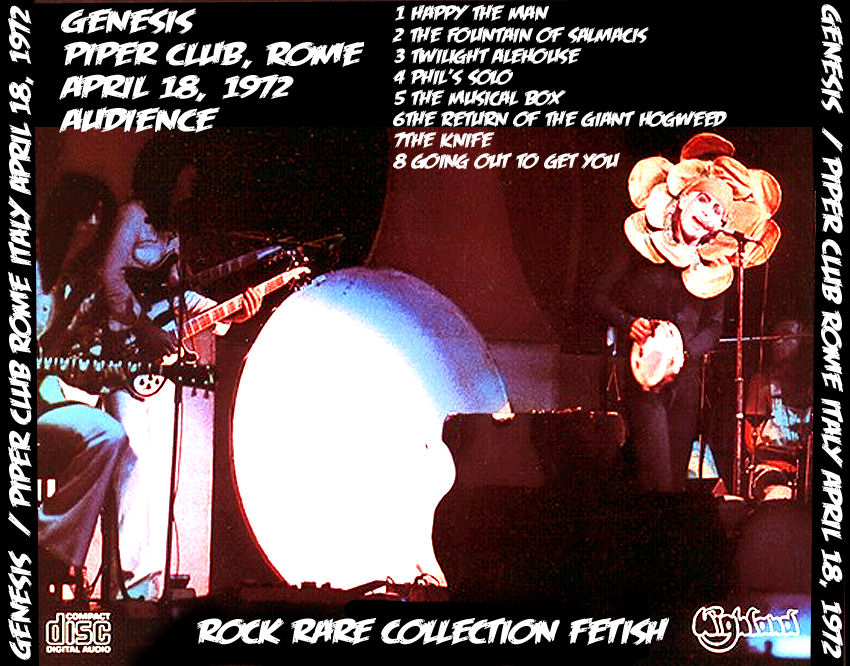 A concert of which these remain video, first to show the band on stage and backstage. LOOK: 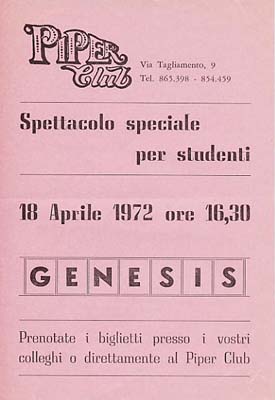 Here is the memory of Mike Rutherford in The living years (Trad. G. Testani ):

"Rome was always a benevolent city for us: that sense of antiquity, history and grandeur was the perfect setting for our music. In a short time we would have come to play in arenas and stadiums, but at the beginning we performed in small clubs in front of an audience of XNUMX-year-old students. The shows were held mid-afternoon on Sunday to allow the boys to go home in time to go to bed. "

And here's the one of Phil Collins in No, I'm not dead yet, traduz. A. Mioni, M. Piumini:

"The Italian public is extraordinary. Not only do they adore us, but they really catch our spirit. They applaud and scream even at a minimal change of atmosphere, something that Genesis often do: we go from a fast pace to a whispered, to a pastoral interlude , without batting an eyelid. No wonder Italians like us so much: we are an English group that explores the lyrical tradition. "

Bis with Going Out To Get You, as in Lugo di Romagna, performed without Steve Hackett.

Also Richard Macphail in My Book Of Genesis remember with pleasure those Italian days (my translation):

"Being such hardcore fans, the Italians had bought and absorbed all their records; they knew every note and nuance of the songs. It was truly extraordinary. We had never tried anything like that. I was there at the mixing desk in the audience and everyone was clapping their hands, seeing my boys so understood and appreciated was a wonderful experience. The fans loved everything and rewarded the band with a standing ovation at the end of each show. This worked wonders for their trust and everyone and five guys, Peter, Mike, Tony, Steve and Phil, have never forgotten the warmth of their first tour in Italy, or its importance in their development as a band. I hope we paid our gratitude debt by playing well for them . "

"With its strange mechanisms, early afternoon performances and dinners between two shows, all culminating in a concert in Rome (...), Italy marked a decisive step towards the Genesis live act as we know it. Maniacally perfectionist, the group dismantled the performance of the night before piece by piece as they moved to the next city.

"Every time I traveled with them I had to put up with the comments on the concert the night before in the van," smiles Conroy (Paul Conroy, tour road manager, Editor's note). They remained fairly calm as they assessed whether Tony Banks had really gone wrong; they were perfectionists. And during the breaks we listened to the Shadows, inside the van. traveling for four hours from one concert to another ».

"The intent was always to improve," adds Steve Hackett, "which risked making him look like an autopsy!"

«We were sailing on sight. And then here is this little ray of light that comes from Italy ». says Mike Rutherford. «The road was hard, all uphill. Suddenly a country comes out that loves you; nothing else is needed to give you the feeling that it is really worth going on »."

Collector's Corner (click on the covers and buy your copy on Ebay). VINYL: 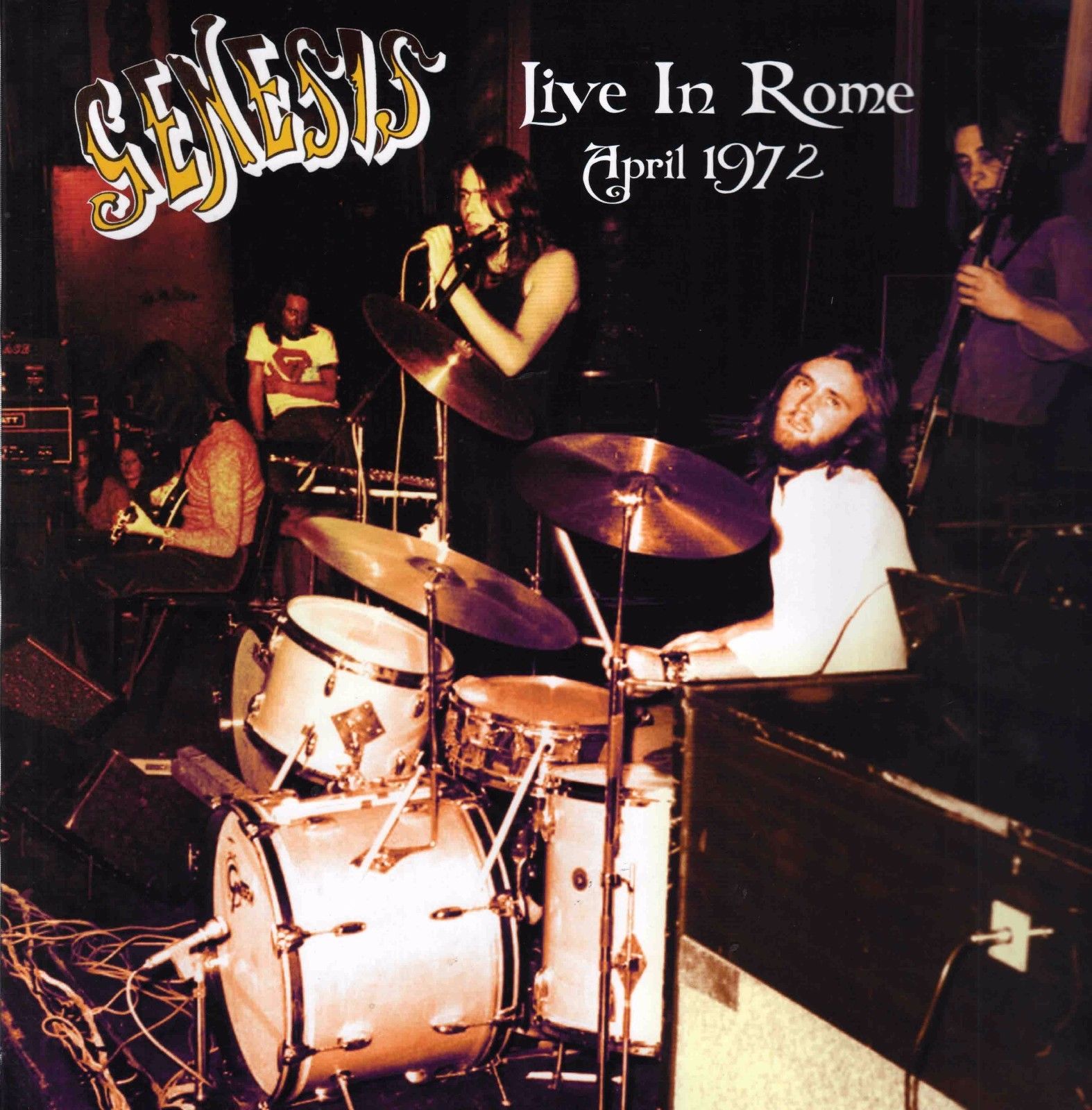 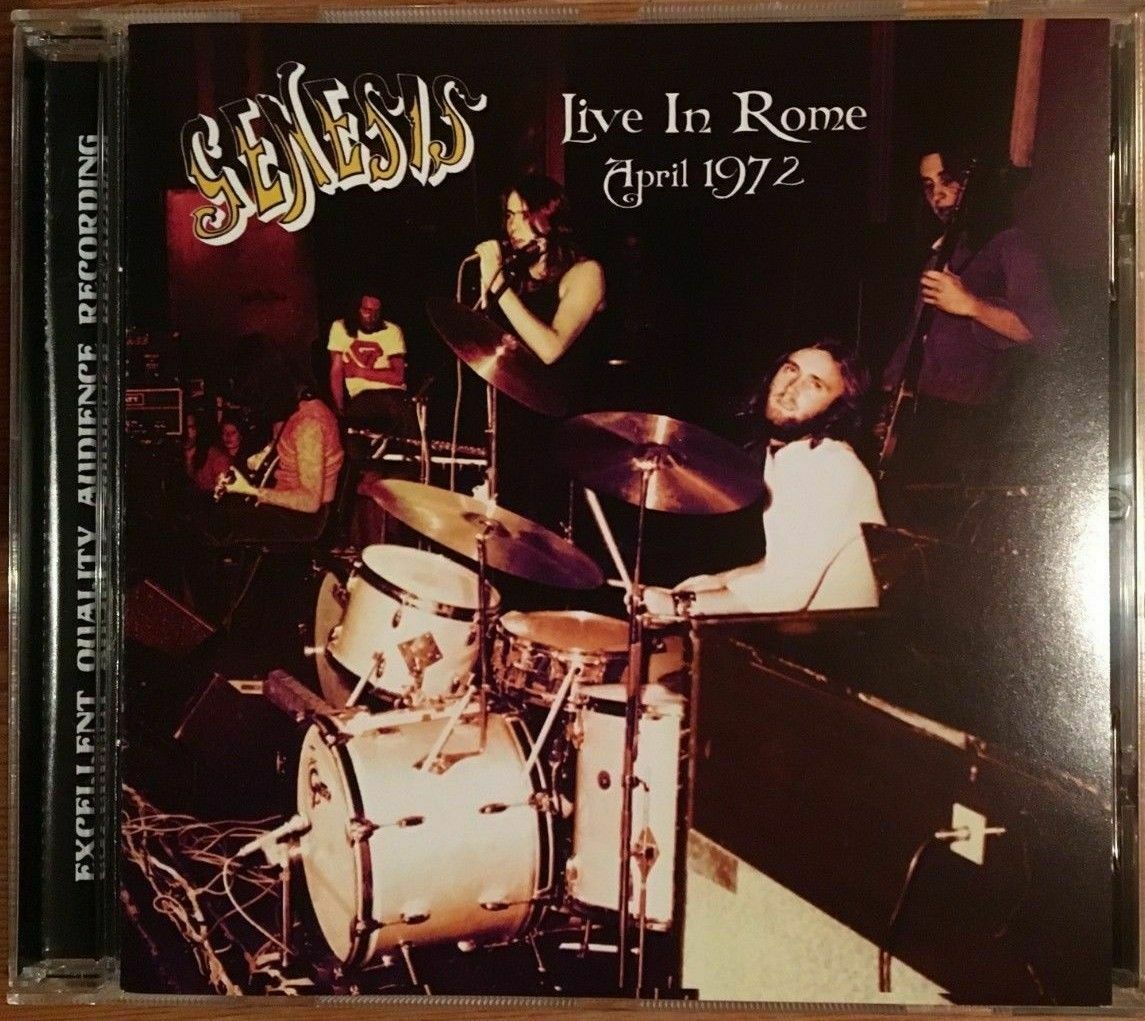 With other Italian dates of that tour: 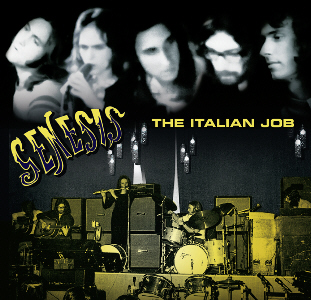 Here are others bootleg from the concert: 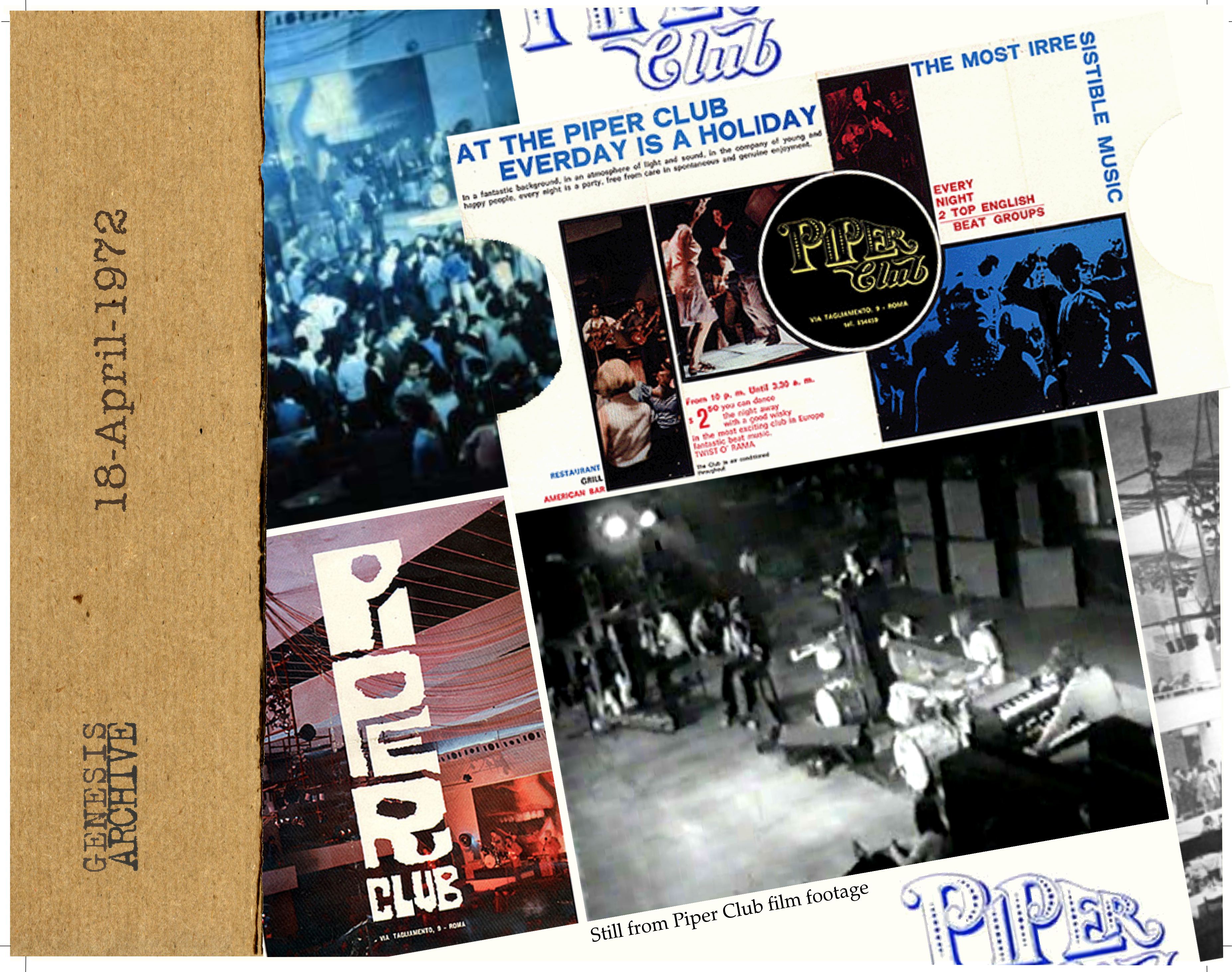 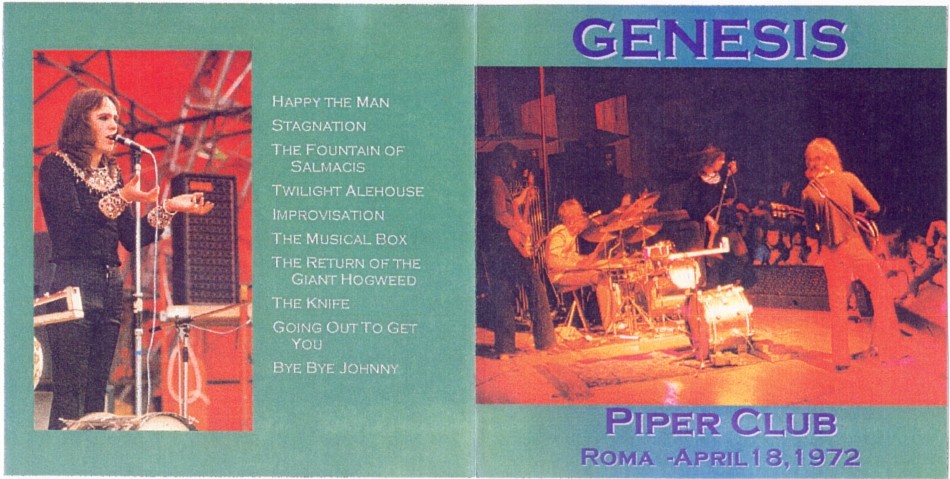 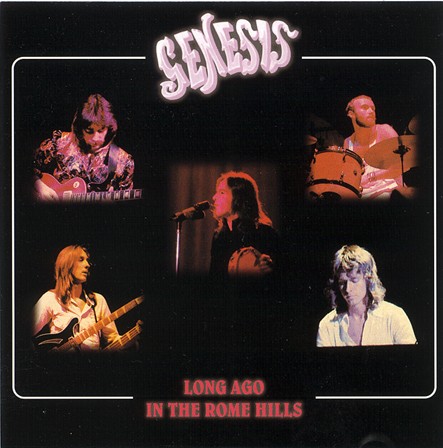 If you have memories of this concert write to info@horizonsradio.it

Peter Gabriel gives fans some live shows from 2002 and 2009 - ALL VIDEOSSteve Hackett has started the recording of the new album, here are the first stages - VIDEOSteve Hackett: the autobiography "A Genesis In My Bed" comes out on July 24th - PRE-ORDER & INTERVIEWSAnthony Phillips: The Living Room Concert: Expanded & Remastered Edition comes out on July 24th - PRE-ORDERIs Peter Gabriel working on the new album "I / O"? Here are the clues that make (almost) certaintyRay Wilson: crowdfunding for the new album and back on tourThe Musical Box: ALL NEW DATES for the two toursGenesis: Mimmo Vitale tells the DVD "The story of Mr. Rael" - INTERVIEWPeter Gabriel: "Rated PG", the CD and vinyl edition - BUYSteve Hackett "Live At The Royal Albert Hall 2013" - BUY & AUDIONick D'Virgilio (Calling All Stations & Steve Hackett): the solo album "Invisible" is out - BUYPeter Gabriel & Witness: here's how to avoid cases like that of George FloydGenesis & Co. Tribute Band: today's live and livestream concertsGenesis in the special 50 Top Album of PROG ITALIA on Radio Capital - PODCASTA new book: "The Songs of Genesis: A Complete Guide to the Studio Recordings" - BUY"Here's how I tell the Genesis to the British." Mario Giammetti talks about "Genesis - 1967 to 1975, The Peter Gabriel Years"Here are the contents of the new issue of Genesis Magazine DuskThe Last Domino? Tour: DATES & TICKETSPress Review - Genesis on the cover of the new issue of ProgPress Review - Genesis: “A reunion with Peter Gabriel and Steve Hackett? It wouldn't work. "