On December 13, 1972, Genesis landed in the USA for the first time, with a Christmas concert at the Philharmonic Hall in New York. Here is the story of those days.

After touching France, England, Scotland, Eire and Wales, the Genesis land for the first time in the United States, for a Christmas concert, full of problems, at the Philharmonic Hall in New York on December 13 1972, preceded by a live for a few students at Brandeis University in Boston two days earlier. Phil Collins, in his autobiography "No, I'm not dead yet", Mondadori, tells those days:

"As soon as we arrived we found out that our American manager, (...) organized a concert at Brandeis University near Boston, Massachusetts. At lunchtime. So our first performance on American soil is an atrocious and hasty disappointment. English rock students, or at least ours, care less about what we thought, and they seem more interested in their studies or sandwiches. This does not stand in favor of the good fortunes of Genesis in the United States. 'America. 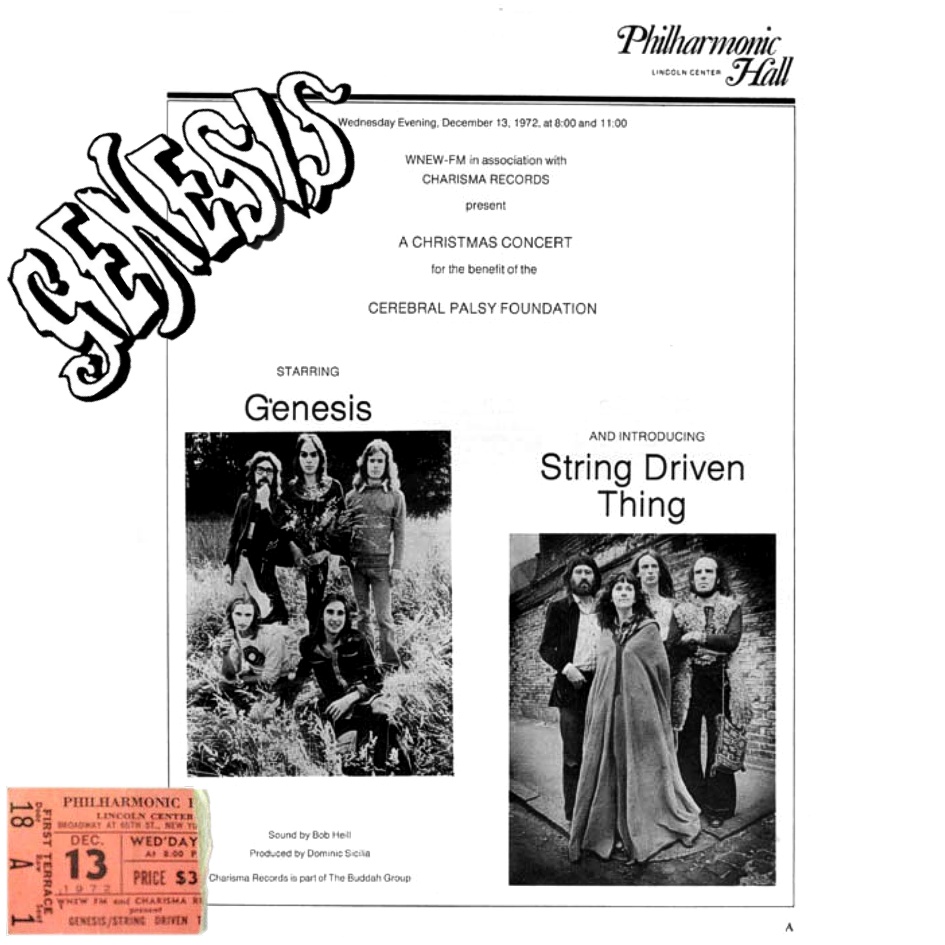 (...) Approaching for the first time in New York, we are overwhelmed by the enormity of the metropolis that falls on a group already dazzled by the failure of Boston. But entering the sunset from George Washington Bridge, the Manhattan skyline lights up gradually, illuminated by millions of lights. New York! We saw it in the movies, and now we're here. (...)

And then we go to Philharmonic Hall to test and discover a very big problem: the different electrical system in America implies that electromechanical instruments go to 60 hertz and not to 50 as in England. This means that the Mellotron (a new toy that we bought from King Crimson) and the Hammond organ are out of tune compared to the guitars. "

"Unfortunately, there are several problems: the director of the Philharmonic Orchestra, Leonard Bernstein, is rehearsing with all the elements and keeps the hall occupied for longer than expected, preventing the Genesis from making a decent soundcheck. In addition, the technical inconveniences, including the differences voltage between Europe and the United States, they do not give respite even this time to the point that even the quiet Mike comes to throw the bass on the ground when he returns to the dressing rooms. In fact, just before the concert, an amplifier breaks, replaced with another quickly rented and fury, however, which will emit an annoying buzz throughout the concert, ruining the most delicate passages. "

Listen to i Genesis live at the Philharmonic Hall in New York:

"We find an improvised solution and, that evening, we do the concert at the least worst. It seems that the audience does not notice anything strange, but despite the five of us we are synchronized telepathically, for Genesis the concert is a mess. We get off the stage, we take the elevator to the dressing rooms and the air is green with anger. Even years later, just naming that first concert in New York makes us all agitated and brings back horrible memories. "

Mike Rutherford tells in his autobiography The Living Years, Arcana:

"The Rickenbacker bass I played made a hideous buzz: I didn't hear a note all evening. The others also felt nothing and the feeling was that we were throwing away an opportunity. (...) Immediately after the show I threw it to the ground my bass in an attack of anger, cursing and cursing. "

A first stage in the United States that was not particularly successful, therefore, perhaps for the unripe times and the notoriety of the band still poor overseas, despite the expensive promotional campaign organized by the USA branch of the Charisma Buddah Records. The technical problems certainly had great importance. But, as Giammetti still recalls:

"(...) the reception of both the public and critics will instead be very favorable (also for the String Driven Thing support group), although considering the American move perhaps premature as the Genesis are still relatively known in England and, Italy aside, they made sporadic appearances only in France and Belgium. "Our technicians were only able to enter the Hall after four o'clock, we had trouble with Mike's bass amplification and at one point my voice started to I came home with the flu and the concert was one of the most stupid we have ever had. At the end I was very depressed but now thinking about it I am happy because if we liked each other in those conditions who knows what will happen when we are in shape next time. »(Peter Gabriel, Hello 2001 14/7/73,« Very recent from London », Armando Gallo)."

Peter is right. Because the North American one is an experience that is repeated from March 3, with some dates in the USA and Canada, this time with more success. Listen to the first concert:

The album Genesis Live was recorded in February 1973 during the English part of the tour.

Setlist of the tour:

Other pieces performed during the tour: